Disclaimer by Renee Knight
In general there are three types of books I will read with no questions asked; fiction set in colleges, fairy tales and classic 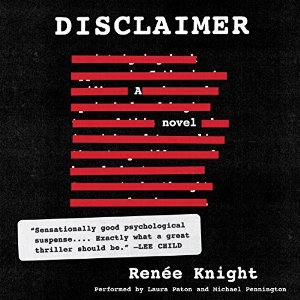 retellings, and books about books and writers. Knight’s Disclaimer is about a filmmaker who finds a book in her house and  starts reading it (as one does), only to figure out that it’s about one of her own thoroughly hidden, deep dark secrets. Of course she’s totally paranoid and wonders where it came from, how it was placed in her house, and most importantly who knows her secret and what they intend to do with the information. The idea of this novel and the creep factor are increased exponentially for me as someone who a) loves books; and b) is never really completely sure how all of my books have made it into my possession. Knight’s writing has me hooked, and thankful that my secrets are generally pretty tame. Embarrassing, maybe, but not life threatening or anything to write a book about.

The Underground Girls of Kabulby Jenny Nordberg
Nordberg first covered Bacha Posh in an investigative report for the New York Times, and continues her research in this book exploring the lives and families from a cross-section of Afghan society- how each of the girls initially reacts to their opportunity, and how they handle being asked to transition back to a traditional female role. The stories she shares are as poignant as they are fascinating, shedding light on gender roles the world throughout even as they examine this seemingly alien microcosm.

Weightless by Sarah Bannan
Bannan’s impressive command of the first person plural narrative imbues Weightlesswith a suspenseful and guilt-inducing immediacy that’s not soon forgotten. The novel deftly forces readers into dual roles of antagonist and innocent bystander as a set of escalating circumstances swiftly forces “It” girl newcomer Carolyn Lessing from a revered status to that of a shunned outcast. Bannan’s accurate and riveting portrayal of this close-knit and homogeneous small town sheds a canny light on the alarming parameters of this century’s high-tech bullying and the tacit behavior which leave us all as culpable participants.

Pretty Baby by Mary Kubica
Heidi Wood’s family is stunned when she brings a homeless stranger, Willow, and her young and sickly infant into their  home – especially when Willow shows no signs of leaving. Heidi, however, is oblivious to their concerns as she tenderly nurses mother and child back to health. Trouble surfaces as Heidi’s husband slowly gathers disturbing information about their houseguest’s troubled past, but he wonders if it will be too late to save his family. Kubica’s layered tale unravels from 3 perspectives: that of Heidi’s husband Chris, Willow, and Heidi herself, all displaying themselves as vulnerable, appealing and justified in their actions. Kubica’s insightful depth of writing broadens the scope of the family-in-trouble trope to a psychological drama that is as tense as it is surprising.

A Necessary End by Holly Brown
If this were real life and Adrienne were your friend, you’d be hard pressed not to advise her against the course of action she takes in Brown’s rich, suspense ridden novel. Craving a child, the way she once craved her husband Gabe, Adrienne persuades him to adopt a baby he doesn’t want from a hasty and suspicious young woman who proves to be a veritable doppelganger for the young Adrienne. Leah complicates an already tense arrangement when she insists on living with the couple for a year before signing away parental rights to her child. While Adrienne is still recovering from their last failed adoption, she and Gabe share a menacing past which threatens to simmer over.  It’s a twisty mess for sure but the kind readers love to unravel. Secrets abound and tragedy is all but inevitable in this taut and wily tale of two women who would give anything to have the perfect family.

A Court of Thorns and Roses by Sarah J. Maas
A Court of Thorns and Roses stuns with its intricate and absorbing world building and complex and kick-ass heroine. Feyre is the brains and brawn of her impoverished clan, and is solely responsible for the care and feeding of her family. When her skill with a bow and arrow kills and secures her the pelt of an enchanted wolf, it also lands her in a world of trouble. Whisked away to live with a Fae warrior as punishment, Feyre encounters a world of beauty and danger, where she’ll need all her wits about her to survive the land and falling in love. Maas is writing at the top of her game with this magically enchanting story blending  two iconic fairytales, Beauty and the Beast and East of the Sun, West of the Moon, into something equally fresh and wonderful.

The Ice Twins by S.K. Tremayne
Tremayne’s psychological thriller tackles our obsessive fascinations with twins and motherhood, as it delves into the unnerving story of Sarah and Angus Moorcraft, and their surviving daughter, Lydia. Though the Moorcrafts were once a golden couple who took pride in their beautiful twin girls, their now tenuous and unraveling marriage has been further strained by the sudden death of one of their identical twin daughters in a mysterious fall the year before. Grief-stricken and financially unstable, the family has arranged to move into an isolated “and dilapidated cottage on an otherwise uninhabited Scottish island that Angus inherited from his grandmother. Tremayne maintains a steadily creeping eeriness from the time the surviving twin utters the words “It was Kirstie that died. I’m Lydia”, and Sarah begins to believe they declared the wrong twin dead. This clever page-turner skillfully maintains suspense and intrigue until it reaches its dramatic conclusion.

In Girl in the Dark, Anna Lyndsey is in the prime of her life. She is independent, a homeowner, and excels at her career.

She is falling in love with the man of her dreams. An allergy to the artificial light emanating from her computer screen is at first a painful nuisance, but as her condition worsens and spreads to include natural light, Anna is forced to give up her job and any semblance of a normal life, to secret herself away in the dark environs of a light-proof lair she has carefully pieced together through experimentation and ingenuity.
With some bouts of sensitivity that prevent her leaving this room for several months at a time, Lyndsey shares the excruciatingly considered routines, games, audiobooks, people, and inspiring moments that keep her alive, as well as the slow progress in diagnosing and finding viable treatments to alleviate her symptoms. By turns introspective, humorous, thought-provoking and inspiring, Lyndsey gracefully shares her journey while instilling admiration for both her her spirit and the remarkable courage and strength that allows for thriving under adverse circumstances.
Share
Comment
What To Read