Man In The Woods by Scott Spencer 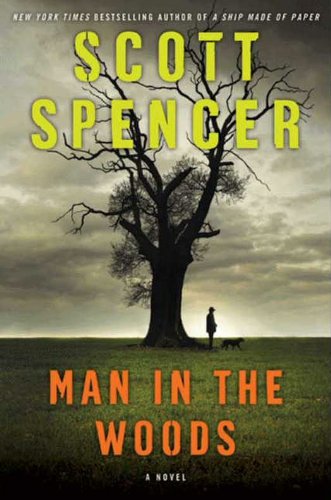 Paul has lived a rootless existence for most of his life but recently has found the love of a good woman in best-selling inspirational author and recovered alcoholic, Kate, and has made a family with her and her daughter Ruby. A carpenter by trade, Paul is on his way home from a disappointing quest for work in New York City when he stops off at a state park to clear his head. There, he encounters a man with a dog who changes his life, and the lives of those he loves, forever.

Man In The Woods was my first foray into Scott Spencer. He appeared on my radar when one of my readers mentioned his name on a list of books she was recommending that I read. It was very easy to slip into this novel and start to feel things about the characters, almost against my will. I appreciated that the characters were well-rounded. They have their  good points, their struggles, and their flaws. They were so full realizes that I wanted to see things work out for them when they hit some rough patches.

I loved the way both Kate and Paul approached their faith in such different ways. They embrace their faith and readjust in the aftermath of what Paul experiences in the park. The supporting characters with whom they interact are also so well drawn that I enjoyed the glimpses into their perspectives. The novel is divided into two parts, and as much as I wanted to see how everything tied together, I had to give myself a few days before I started in on part two.  I was so satisfied with the way things that had progressed so far that I just wanted to hold that for a while, before facing whatever was going to happen in the rest of the novel.

The strength and finesse of the writing that was on display on each page of this novel was impressive.  Nuanced characterizations, and the taut and suspenseful plot examining morality, anger, impulse decisions and faith kept me riveted throughout.  Scott deftly examines the intricate decisions, responsibilities and compromises which comprise family life and the lengths to which people will go when comfort and security are threatened. The intense psychological suspense was hard to bear  (in the best way!) and I read the book with the distractingly delicious feeling of waiting for the other shoe to drop.