The Explanation for Everything by Lauren Grodstein 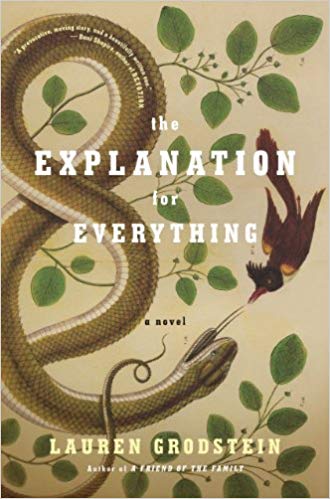 Andy Waite is a young father, atheist, and biologist. He’s also raising his daughters alone after the death of his wife, Lou, in Lauren Grodstein’s new novel The Explanation for Everything. Andy is adrift  and at somewhat of a crossroads. He is estranged from his brilliant but scandal plagued mentor, attempting tenure at what he considers to be a second tier university, and managing his girls (who seem older by the minute). He’s also troubled by unexpected results in the research that is the cornerstone for a grant he is seeking. Though Lou died several years before, he still grieves deeply for her and sees her ghost everywhere. Andy’s life takes several unexpected turns when Lionel, a young Creationist, joins one of his courses. Lionel introduces Andy to Melissa, a young woman seeking sponsorship for an independent study in Intelligent Design.

The Explanation of Everything proves why Grodstein’s work is lauded by readers and critics alike. Her writing is lovely and well-considered. I loved the details that supported the  intimate portrait of Andy’s relationships with his daughter; his neighbor, Sheila; and his place among the faculty and staff. Grodstein made it easy to see why Andy arrived at some of his conclusions, and how he could have wandered so far off track.

Still, there was something missing (a lack of urgency, too much apathy from the characters?) that was hard to pinpoint and bogged the story down. While I was happy enough while reading it, I didn’t find particularly compelling reasons to go back to it once I had set it aside. And though Andy and his daughters were fully realized (and maybe even Lionel, whose character I really enjoyed), the revolving female characters would have benefited the novel had they been more completely fleshed out. I also would have liked to have more cohesion in the way certain story lines were linked. Halfway through the novel a story that was before only mentioned in passing takes center stage in a way that is rather jarring, even though it’s also one of the more fascinating aspects of the book. As carefully paced as it is the ending is rather abrupt and vaguely unsatisfying.

Ultimately, The Explanation for Everything didn’t work for me as fully as I had hoped, but Grodstein is an author whose work I will continue to look anticipate. A Friend of the Family comes very highly recommended, so luckily I will have that to read in the meanwhile.

Book Club Pick? Definitely. The subject matter (widowed man raising two girls, college professor who falls for a student, and creation vs. evolution) is what made this appeal to me, that and Grodstein’s stellar reputation with trusted voices. There is plenty to discuss, and frankly, I think book clubs work best when there are a variety of opinions on the book and subject matter. There was much that I appreciated about this novel, and it easily lends itself to spirited discussion.