Claude & Camille: A Novel of Monet by Stephanie Cowell 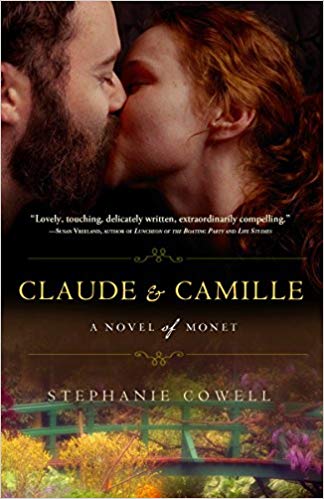 In Claude & Camille, Stephanie Cowell takes us back for a look into the early life of Impressionist artist, Claude Monet. While Cowell vividly creates a picture (really, no pun intended) of Monet’s struggles to master his art with little financial support from his family, she also traces the life of his tumultuous and passionate love affair with Camille Doncieux, the upper class beauty who would model for many of Monet’s painting and who would much later become his wife.

Cowell has a writing style that is captivating, engaging and easy. I was immediately entranced and frustrated for Monet and eventually by him in this fictional rendering of his life. It is easy to be influenced to stereotypes of artists – the starving artist and the crazy genius are two that immediately pop to mind.

Monet had a little of both at work in his life, but Cowell also shows how much of what the artist (and by extension his family) endured was the result of an uncompromising commitment to his work. He was driven to bettering himself as an artist, and to an unwavering pursuit of his artistic vision. It’s hard to fathom a man who will continue paint as his sole means of employment (Monet would not even consider taking another job) even as his family is being thrown into the street and pursued by creditors.

Yet, Monet considered himself to be made for his art and loving Camille. It was extremely difficult for him to have balance between the two. The efforts that he made to provide for his family had to be on his terms and within his chosen art form.

Camille Doncieux is just as passionate and maddening as her husband. Little is known about her, yet Cowell has created a charming picture of the artist’s muse as a young woman who wants to be deeply involved with life. I am so fascinated by how historical fiction writers pick and choose the moments that they will illuminate, and there are some particularly nice moments where Camille’s character is exposed.

Camille flits from one art form to another as she tries to figure the best way in which to express her lively spirit. She longs to be a writer, or an actress but she is just as determined to be in her relationship with Monet despite her parents disapproval and having to forgo the comfortable life she had always known. Though their beginnings are tenuous and slippery it is as difficult not to believe in the love that they had for each other as it is to feel disbelief at the circumstances they encountered.

While this novel is mainly about the relationship between Claude and Camille, and Monet and his artistic struggles, a lot of detail is provided about the strong relationships that Monet had with the other Impressionists. Pissaro, Renoir, Auguste and the close relationship that he had with Bazille, the wealthy artist and friend who acted as patron to Monet and all the others. Readers get to see how the Impressionist group was formed. The novel was much richer for highlighting their fond relationships with one another.

Cowell’s novel is a great example of how life is usually just as fantastic or even more so than anything that can be imagined and penned in fiction. I think that’s one of the things that has me so interested in reading about the lives of artists, writers and musicians, whether I have experienced their work or not. I love it when historical fiction is seamless education in the history of the time and peopled with characters who come to life and whose stories I get caught up in, and Cowell’s nimble prose readily accomplished that task. If you are even mildly nosey like I am about these type of goings on, then this book will definitely be of interest – and if you are a fan of Monet  or the Impressionists, then you are in for a real treat.